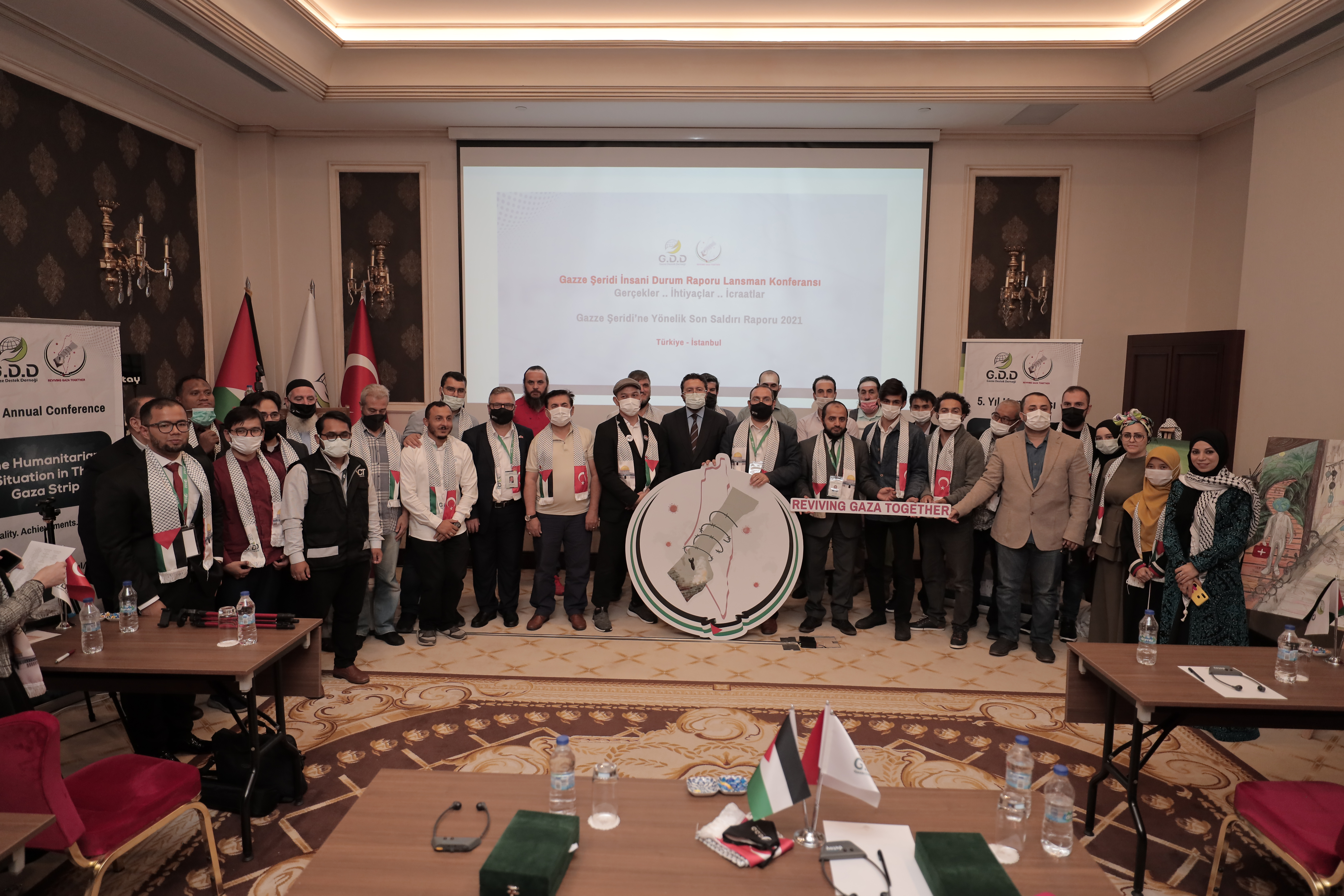 On the occasion of International Charitable Action Day, and after 15 years of the blockade imposed on the Gaza Strip, the Gaza Destek Association (GDD), which focuses on the humanitarian affairs of the Strip, has held a press conference entitled “Reviving Gaza Together” to launch the fifth annual report on the humanitarian situation in the Gaza Strip in several languages. In addition, GDD released a special report on the damages of the recent aggression on the Gaza Strip, in the presence of international institutions, donors, and the media in Istanbul-Turkey.

In a press conference, Mr. Caner Koktaş (representative of the Gaza Destek Association) reviewed the launching of a report on the reality of the Gaza Strip, which has become the worst over the years of the siege, causing the Gaza Strip to become unviable according to United Nations expectations. Tragic human figures have been recorded, which are considered among the highest in the world in the fields of unemployment (48.6%), poverty (56%), water pollution (97%), while the power cut-rate reached 12 hours a day. Mr. Koktaş also warned of an impending disaster in the Gaza Strip, especially with the spread of the Coronavirus within the Strip in light of a deteriorating health reality. The World Bank had previously confirmed that the Gaza Strip is among the worst economies in the world during the last two decades, and accordingly, Koktas called on the United Nations, the Organization of Islamic Cooperation, and the League of Arab States to play their role in ending the illegal siege on the Gaza Strip, with which the humanitarian situation is worsening year after year in full view of the world but to no avail. He also called on the donor institutions for the widest participation and interaction in an international campaign to support the Gaza Strip under the title "Reviving Gaza Together".

Abdurrahman Çetin, head of the Turkiye Diyanet Foundation, has further added that the imposed blockade has hampered the sheltering (housing) situation in the Gaza Strip whereby the aggressions by the Israeli forces led to the destruction and damaging 77% of the houses in the Gaza Strip. Meanwhile, the reconstruction process has been going on a very slow pace leaving tens of thousands of families in a state of displacement knowing that nearly 2,200 housing units were destroyed and 15,000 were damaged during the recent aggression, hence, raising the rate of homelessness for families under unstable social living conditions. In addition to the presence of more than 27,000 homes that are not suitable for human habitation, Mr. Çetin called on the relevant international bodies to put pressure on the occupation to facilitate the reconstruction process. He also called on donor institutions to launch a “reconstruction and sheltering” campaign to help the displaced and the poorest families rebuild and rehabilitate their houses.

For his part, Mr. Awliya Ihsan Fahdiyat, deputy director of ACT and head of the Indonesian Committee for Palestine, explained the dire health situation in the Gaza Strip, including drug outages by 44% and medical supplies shortages by 31%. He then explained the impact of power outages in hospitals on the lives of patients, stated the financial deficit in laboratory materials (28%) and the presence of 300 broken medical devices, in addition to the suffering of the Ministry of Health in Gaza in combating the spread of the Coronavirus and its impact on the deteriorating health situation in the Strip. Moreover, he reported a shortage of medical supplies at the quarantine centers and hospitals. He announced the launch of the "Healing Touch" campaign to provide medicines and medical supplies, and called on international institutions, led by the World Health Organization, to play their role in saving the health situation in the Gaza Strip.

In a related context, Miss Riley Schultz, a representative of the Swedish Nordisk Hjalb Foundation, explained the difficult educational situation, especially with the start of the new school year, which threatens 45,000 university students with their inability to enroll in their universities, and 360,000 school students who cannot afford uniforms and a school bag. In addition, she reported that 49% of the families lack internet access at home, thus, preventing students from benefiting from the online education amidst the Corona pandemic. Miss Riley added the recent aggression that severely destroyed 6 schools and partially 124 schools have worsened the situation.

Shortly afterward, Mrs. Haneen Abu Nahla, representing the Belgian Enable Foundation, indicated that the poor educational condition in the Gaza Strip is mainly due to the bad economic conditions in which the unemployment rate reached a globally high rate at 48.6% and that the power outage has caused the closure of 80% of Gaza factories during the blockade, while the Corona pandemic has affected the continuity of the remaining factories, reducing their production capacity by 20%. In addition, more than 20 factories and 490 agricultural facilities have been reportedly destroyed along with more than 2012 economic, industrial and commercial facilities, and 20 tourism companies. Consequently, the unemployment rate among the youth increased after the war to more than 19,700 youth unemployed. Accordingly, Mrs. Abu Nahla called on donor institutions to launch the "Economic Empowerment" campaign to support the economic sector by providing university scholarships to students in the strip, paying the accumulated installments of graduates, and supporting economic and small projects for young people.

At the end of the conference, more than 50 donor and international institutions that have contributed to projects to alleviate the suffering of poor families in the Gaza Strip, especially during the recent aggression and humanitarian campaign projects, were honored as an appreciation of their efforts in supporting the besieged strip. Moreover, projects of the "Reviving Gaza Together” campaign were announced to support the health sector, reconstruction, education, and economic empowerment of the youth, all of which are urgent sectors for the survivability of more than two million citizens in the besieged Gaza Strip.

No comments have been posted so far.

Subscribe to our newsletter to be informed about the campaigns.